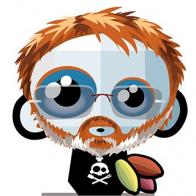 One of the things that has stymied me for a long time was how to make a fairly low cost bean cracker that would be adjustable. One of the main complaints of the Crankandstein is that it inconsistently over cracks the beans generating a lot of fines, while simultaneously generating large pieces of nib with shell attached.

One of the best alternative designs I have seen comes from Loren Gautz's lab at the University of Hawaii. It's based on a Brazilian coffee sheller but, unlike the original, is adjustable. Also, unlike the original, it's not made from food-safe materials. Yes, HDPE is food safe, but PVC is not, and if little bits flake off (likely, cocoa beans are very abrasive), then there's no easy way to remove the particles of plastic from the nib; you just have to hope that they get sucked away in the winnower. This may not be an issue in some places, but in New York and California, you run the risk of being flagged by the inspector.

Here's the overall view of the (partially disassembled) device:

The beans are introduced to the right of the knurled roller and when the cylinder is cranked they are guided through the throat - the narrows slightly (and the distance can be adjusted).

I show other parts so you can see how simple the mechanism actually is.

Separating is accomplished using pieces of PVC pipe that are heated and formed and expoxied together. One end is hooked up to a shop vac and the nib drops into a barrel below.

If it looks kludgey that's because it is. But it is ingenious and it is cheap to make - even with new HDPE the bill of materials is under $50. I spent months trying to figure out how to make this from materials that would pass inspection here in New York City and in other jurisdictions known for being tough - like San Francisco.

There is at least one of these in production that I know of. ChocolateLife member Dylan Butterbaugh of Manoa Chocolate in Hawaii built one. You can see it starting at about 1:50 in this video, which is posted on TheChocolateLife (opens a new tab or window).

I've looked at a lot of different DIY mills for handling grain for home brewers, and here's the one I came across that I like the most. You can make the frame from simple angle iron welded together, and the hopper and rollers are made from stainless steel, and the rollers use plain schedule 40 pipe that's easy to get and relatively cheap. The gap between the two rollers is adjustable. What I don't like about the design is that the little grooves that are machined into the drive roller probably don't provide enough grip for the larger cocoa beans.

I was doing some research this morning into alternative energy creation, something that interests me when you're talking about working with cacao farmers that are off the grid. I came across an MIT project for carbonizing papyrus or corn cobs into charcoal and then turning them into briquettes. One of the pieces of equipment they made was acrusher that reduces the amount of fine particulates generated. Inhaling those particulates can have negative health consequences.

Here's an annotated sketch of what the crusher looks like:

One roller assembly they made used concrete - not appropriate for this application - but another used expanded steel mesh tack welded to a steel roller. Voila - there's the answer to proving the kind of surface needed on the roller(s) to pull the means through and crack them.

Here's what the roller with the expanded steel mesh on it looks like:

Tack welding SS expanded mesh to a roller made from pipe (and it occurs to me that if you could find a way to affix to PVC pipe you could use that instead - maybe fill the PVC pipe with concrete, too) lends itself to either the University of Hawaii design or the homebrew grain cracker design. For the UH design I would line the throat with mesh as well - probably in some other size or orientation to provide maximum friction.

The frames can be made from a wide variety of materials and the cracker can be operated by hand, bicycle, or motorized.