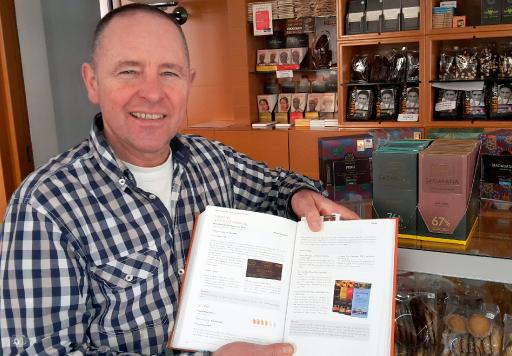 Just received a fresh cacaopod, form Colombia, how nice is this!!

Shall open this one very soon...

The Art of Chocolate. From the Finest Cocoa to Exquisite Chocolate. part 6

Published by Max Felchlin AG, Schwyz, on the occasion of the 100th anniversary. (2008)

Since visiting Felchlin 2010 and2011, I must admit Im addicted to there chocolate and there philosophy. This book is to interesting not to blog, so I must share this on my blog.

The Journey: From the Farmer to Basel.

After selection, the dried beans are generally transported as bulk goods in the hold of the ship (for example, cocoa from the Ivory Coast) or, more rarely, in sacks, and then taken on the long journey to their destanation for further processing, for example, to Switzerland. In the most cocoaproducing countries, the ships dock in special ports that are sometimes named after the cocoa that is loaded there. One example of this is Maracaibo, a port in Northwest Venezuela between the Lago de Maracaibo and the Caribbean Sea. Beans from Beni in Bolivia have a particularly long journey. First of all, they are shipped about 1200 kilometres along the waterways in the Amazon Basin to the nearest town and, from there, along the first mountain pass through the Andes to La Paz, the capital of Bolivia, which is located at an altitude of 5200 metres above sea level. From La Paz, the journey continues across the Altiplano* and the second pass through theAndes, about 4300 metres above sea level, and then down to the Pacific Coast as far as Arica in Chile. After travelling a total distance of some 1600 kilometres by road, the beans are loaded onto ships and taken northwards along the coast via the Panama Canal and finally 12600 kilometres across the Atlantic to Rotterdam or Amsterdam, where the containers are transferred to a freighter and carried a further 850 kilometres up the Rhine to Basel. In Basel, the ship arrives in dock I. Here, the cargo is unloaded and the valuable sacks loaded onto pallets and stred in a warehouse until it is time for further processing. Depending on weather conditions, the journey of the Beni beans takes two to three months and covers a total distance of more then 16000 kilometres; this is about 40 percent of the circumference of the globe. During this long journey, the fermented and dried cocoa beans are subjected to several changes of temperature and climate: from the warm, humid air of the Amazon Basin to the cold, dry air of the Altiplano and Andean passes; from the damp sea-air of the Pacific to the warm, humid air of the Panama Canal and, finally, a long cooling period crossing the Atlantic. The 6.5 percent moisture content of the beans after drying has to be maintained at all times. The beans always need sufficient air. They are transported in jute sacks or in sacks made from plasticised, air-permeable fabric. In containers, the beans can sweat, irrespective of whether theyre packed in sacks or as bulk goods: the containers are lined with corrugated card and paper to absorb any condensation. When carried along the Rhine, they are occasionally aerated by opening the sliding roof above the hold.

Arrival at the port in Basel Its late September. The acidic aroma of fermented cocoa beans hangs in the morning air. It wafts out of hold of the MS Chteau Chalon, which is docked to the quay wall of dock I. The ship docked the previous day and bulk cocoa beans from the Ivory Coast, destined for a mass producer, are loaded onto a grain wagon using a blower, followed by the sacks for Felchlin containing cocoa beans from Venezuela and Colombia. Three workers stand in the hold of the ship, where the sacks are pilled on a wooden floor, and transfer them onto pallets, two sacks per pallet.
Buffer warehouse Some 600 tons of cocoa beans of about different varieties and origins are stored in the buffer warehouse. These beans are kept in reserve to safeguard against production or delivery bottlenecks due meteorological, ecological or political factors and to cushion against price fluctuations. All incoming cargo is given a number. The various rooms contain different jute fabrics, some thick with a tight weave and others thin with a loose weave. The temperature and humidity on each floor of the warehouse are checkedeach week.

Next time part 7: The Transformation From Bean to Chocolate.
Posted in: default | 0 comments
Scroll